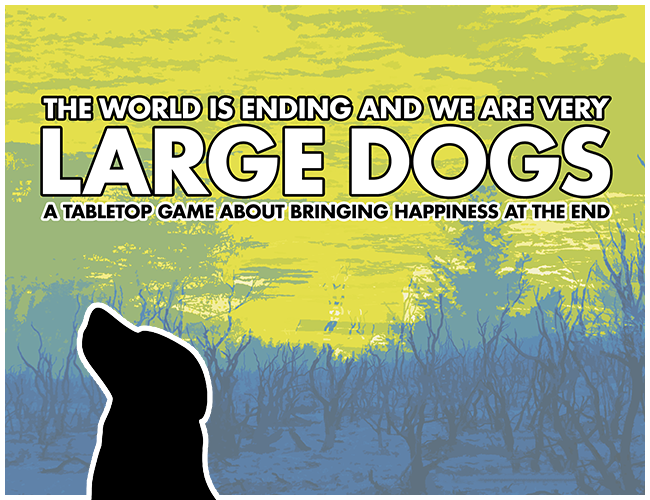 In terms of unambiguous titles, the tabletop roleplaying game The World Is Ending and We Are Very Large Dogs couldn’t be more upfront about what’s inside the box. The heart of this game, and it is indeed full of heart, is right there on its sleeve. You’ll know straight away whether or not this game is for your table. The good news is that if the title is appealing, you should know the game delivers on the premise, and in the most wholesome and poignant of ways.

In the collaborative, GM-less story game The World Is Ending and We Are Very Large Dogs, you play a group of large, good dogs:

The world is ending in one week. This we know for a fact. It is too late to stop it. It cannot be slowed down anymore. Especially not by you, because you are just a group of large dogs. All you can do is try and make the final days as best as you can for those that are near and dear to you. Your owners, your community, the other wild dogs in the park, whoever you hold dear.

That’s the opening paragraph of the game, and for me it’s pitch perfect. At the table, it hits like a gut punch and sets mood and tone right from the outset. It’s a credit to designer Eden, though, that from this premise the openness of the character development and story prompts allows for a wide range of experiences, from light-hearted and gonzo to richly emotional and reflective.

The large dog characters are cleverly defined in terms of their best friends through a series of prompts – what does your best friend call you, what do you like to do together. Then players agree to the specific nature of the world ending scenario, which can be vastly different every time you play. The game provides five different scenarios categorised by mood and pop culture inspiration. From there, the game is structured like a conversation as you work together to define how you will live out the final days in the pre-apocalypse. The ending comes at no surprise, but the game isn’t built for shocking twists or a focus on tragedy. It is even suggested that you can decide to skip playing out the apocalyptic end if you’d prefer.

“After all,” says the author in the final line, “this is a game about moments of light.”

The World Is Ending and We are Very Large Dogs is an exemplar of what are increasingly referred to as ‘lyric’ games, as a distinct category of tabletop roleplaying games from story games or more traditional games. The lyric game concept was defined by John R. Harness to describe:

The context of this game is important too. As the author reflects, this game was borne out of that very unique historical moment of global convergence in 2020 when the COVID-19 pandemic was emergent and terrifying, protests against systemic racism and white supremacy rose, and new waves of authoritarian intervention threatened gender and sexual identity in otherwise democratic countries. This was no doubt fertile ground for game like this that invite us to search for meaning in dark times.

You should get this game. It costs one dollar. It’s a perfect prep-less one-shot for first-time players and veterans, and if you get more than one game of it, it’s quite literally pennies on the play.

But, more than that, you should get this because it is a game that can create moments of quite exquisite joy and unanticipated catharsis at the table. Be prepared for tears.

Get The World Is Ending and We are Very Large Dogs (pdf) at itch.io.