Gloomhaven – the game which released as five expansions in one – is getting a big box expansion, which promises as much content as the base game but in a smaller package. This is one of the enticing announcements from  Gloomhaven designer Issac Childres, who just finished up a very generous AMA (Ask Me Anything) on Gloomhaven subreddit. He also revealed his design process, and who in Gloomhaven he’d most like to sit done with at the Sleeping Lion for an ale.

Childres first flagged (that is, teased) the idea of an expansion in November 2016, but noted at the time that he was keen to allow players enough time to fully explore the content of the base game. He had also said at the time that he was going to take his time to enjoy the design process, acknowledging that there was less pressure this time around.

But last week, he confirmed that the expansion was indeed on its way, with just as much content and scale as the original.

There is a big expansion coming after Forgotten Circles. A whole new campaign in another part of the world with new monsters and classes and all of that. Pretty stoked about that. After that, I have ideas, but it is too early to talk about them.

There’s no announcement as when we can expect the big box expansion, and Issac was reluctant to provide a timeline at the risk of disappointing expectant fans.

Honestly, for the scale of the game on release, two free kickstarter mini-campaigns, a book of solo scenarios, and a expansion due to drop at retail in a matter of weeks, there is no shortage of content for this game. There is also a sizable and increasing fanbase producing their own scenarios, and a robust randomizing system built into the original game. This, as it turned out, was a very conscious design decision by Issac right from the outset, allowing for players to be almost purposely overwhelmed by the scope of the game. As he had previously explained,

The whole idea was that it would be a game so big, it would essentially function as a normal-sized game plus 5 or even 10 expansions. By putting it all into one giant box, I would get to tell one cohesive, epic story – not some fragmented thing that was a slave to staggered releases.

Insight into the Design Process

For budding designers, Childres offers some insight into his own transition from PhD graduate to full time game designer. He doesn’t cherry coat the level of dedication and commitment required, noting that he was spending up to 60 hours a week designing Gloomhaven for over 18 months, with no promise of publication or production at the end.

Designing games definitely started off as a hobby, but when my first game Forge War had such a successful run on Kickstarter, and when I considered how much I didn’t like physics any more, I decided to give game design/publishing a try for a year and get a real job at that point if it didn’t work out.

Elsewhere he elaborates on the extent of the required perseverance:

I started designing Gloomhaven in earnest 3.5 years ago, after I finished grad school. I had been playing around with a dungeon crawler before that, but had mostly scrapped all of its mechanics because it wasn’t working well enough. The breakthrough was really the 2-card system. Once I had that in place, the game sort of designed itself. And the team was just me! I eventually brought on an artist and graphic designer and a couple editors, and some fans helped create some of the scenario content, but it was really just me working 50-60 hours a week hammering this beast to life for a year and a half before the files were ready to go to print.

Inspiration for the Game

Gloomhaven is typically cited as an example of a unique fantasy setting, in a genre which is otherwise typically designed as a homage to Tolkien. Childres does make a point of singling out Tolkien and the Kingkiller Chronicles as literary inspirations, he says that video game RPGs provided more of an inspiration for the fully realised Gloomhaven universe and lore. Like Tolkien, Childres started with the races as opposed to the world, and sought to build a framework based around how those characters might interact with that world.

I remember I started with the races, just sort of thinking about what would be cool and unique and make some amount of fantasy world-type sense. From there, given the racial traits, I thought about how did they emerge onto the world as a group, how did they interact with each other, and what world would have been built from those interactions.

As for the inspiration behind the mechanisms, Issac references his experiences with other dungeon crawlers, like Descent and Mice and Mystics, and refining the game system based on what he felt worked and didn’t in those games. The breakthrough happened when he hit on the mechanic of the two-card ability system.

The big milestone was the two-card ability system. I had a dungeon crawler idea before that which just functioned on the whole “move your move value and attack your attack value” thing on each players turn, but when I developed unique decks of ability cards that allowed for so much more player choice, that was by far the biggest moment. Everything after that just seemed like a logical extension of my original vision for the game. 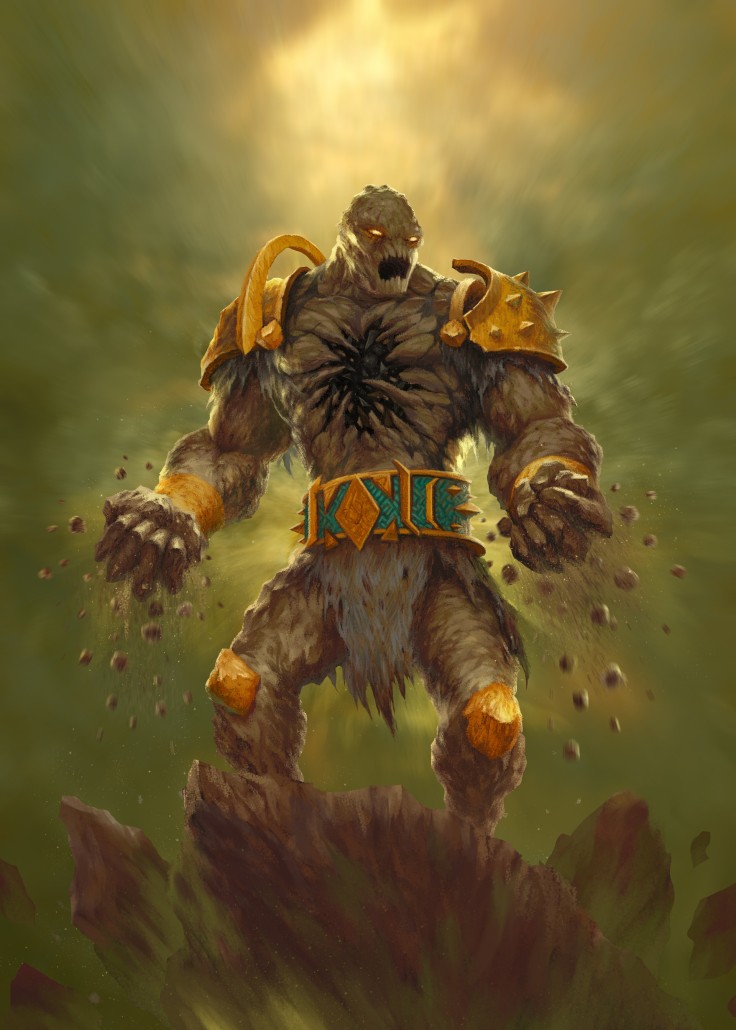 On the question of the why the starting six were selected, Issac confirmed the need for characters who were recognisable as the more familiar RPG archetypes, whilst providing a little extra flavour with characters that embodied the uniqueness of the Gloomhaven setting.

The first four (Brute, Tinkerer, Scoundrel, and Spellweaver) were very much just offering up some base archetypes that players would be familiar with. Of course, I tried to play with and tweak those archetypes as much as I could to give them their own flair and versatility. The Cragheart and Mindthief came along after everything’s place was decided, but backers of the first Kickstarter (rightly) wanted more starting characters, so I designed two new ones during the campaign. I think they ended up being two of the most thematic and interesting characters, so I’m really happy players were given the chance to see them upfront, as sort of alternatives to the base archetypes.

Of the starting six, the Cragheart gets a special shout out as the character class Issac is most proud of.

People have responded to it so well, and I think the mechanic of placing and destroying obstacles is very dynamic, and I love the theme of its backstory and powers. And just how unique it feels compared to anything else I’ve seen in a fantasy game.

The Much Maligned Tinkerer

Spare a thought for everyone’s favourite support that no one wants to play. Issac declared his concerns that of all the characters available in Gloomhaven, it is the Tinkerer who who is most misunderstood and played least effectively. The Tinkerer, he says, “doesn’t get enough love. I think because most people just see him as a healer, and he is so much more.” Later in the interview he suggests that of all of the starting characters, the Tinkerer is the one he would most like to share a drink with. “He just seems like the most stable and likable of the bunch.”

I’ve been thinking about this a lot since, and I’m inclined to agree. I’m not sure I’d be all that comfortable hanging out with the Brute or the Scoundrel, and the Mindthief would surely be the most socially awkward of them all.

You can read the full AMA over at the Gloomhaven Community on Reddit.