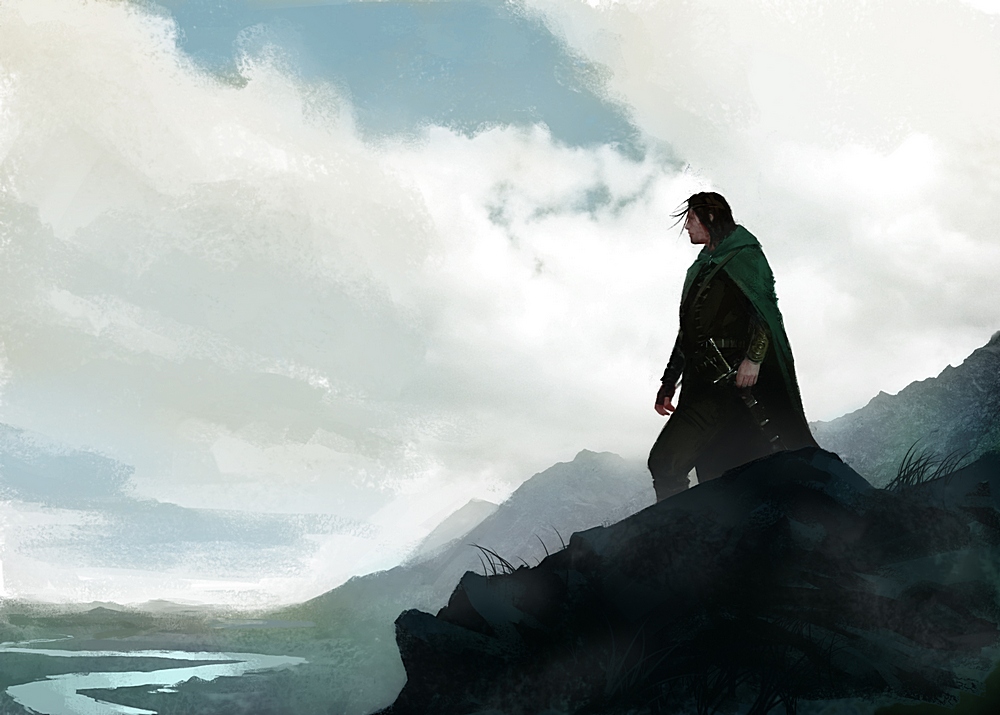 Crownless Kings is a solo campaign journal of the Lord of the Rings: Living Card Game by Fantasy Flight Games. It chronicles each of the published adventures in more or less chronological order, with more or less thematic decks. Each adventure includes a spoiler free strategy overview and deck tech and a separate (spoiler-filled) gameplay runthrough. There’s a sprinkle of Tolkien lore here and there for extra flavour.

The Hunt for Gollum

In this scenario, the heroes are searching for Gollum at the request of Gandalf in the Anduin Valley between the Misty Mountains and the Mirkwood Forest. Rumours have suggested that Gollum is in this area, and the heroes are looking for clues that might put them on the elusive creature’s trail.

There is an outstanding short film that covers this particular quest, drawing directly from appendices of the Lord of the Rings:

Lore Aragorn is a windmill slam pick for this quest from a thematic perspective, given that he and Gandalf searched for Gollum for a decade or so, through the vales of Anduin, Mirkwood and Rhovanion. There is a great overview of the importance of Aragorn to this story at Master of Lore.

If I was being especially strict on adherence to the story in the design of this deck, Aragorn would do this quest alone. Increasingly, the card pool in the game makes a lone Aragorn deck feasible. But, for the purposes here, it made sense to me that Aragorn would recruit a Silvan elf guide with him to direct him through the Mirkwood.

For this, I’ve chosen Mirlonde. And of a quest of this importance, why wouldn’t Gandalf request that Elrond send Glorfindel – the greatest warrior of this or any age – to aid Aragorn? Glorfindel and Aragorn have a long history together, going back to Aragorn’s youth when he was fostered in Rivendell by Elrond. This is going to be a recurring flavour over the course of the Shadows of Mirkwood cycle – Aragorn, Glorfindel and the support of the wood elves.

With these heroes, putting together an attachment heavy deck that maximizes the effectiveness of Glorfindel and Aragorn delivers no particular surprises. Both the Song of Kings and the Song of Travel are relied on heavily for ‘mana-fixing’ so that the main attachments – Celebrían’s Stone, Steward of Gondor and Sword that was Broken – are all readily available.

Rivendell Minstrel and Master of the Forge work in tandem to put these cards into the hand, along with perennial staples like A Burning Brand. Asfaloth or Light of Valinor are must-haves for Glorfindel, and it is typical for this deck to mulligan if neither is in the opening hand. Glorfindel is a beast with one of these, and a weapon with both.

For this quest, the deck is quite light on threat reduction. There isn’t much outside of the heroes themselves – Aragorn and Mirlonde keep threat low throughout this quest. The events are few, but targeted at card draw and treachery avoidance. Daeron’s Runes and Mithrandir’s Advice remain the best lore-based card draw available, as far as I am aware.

Almost all of the allies are elves or rangers, and this again will be a theme that recurs through this the first cycle of this campaign. In terms of their roles in the deck:

Even having piloted this deck a few times, I’m in two minds about the high cost Elven allies Gildor Inglorion and Haldir of Lórien – on one hand they have hero-like stats, suit the theme of the deck, and Gildor’s ability in particular is incredibly useful for card tutoring. But, they are hugely expensive, and inconceivable without the resourcing fixing of the Steward of Gondor.

Otherwise, this is a straight forward and reliable deck that puts some of the strongest cards in the game to effective use.

This decklist is published on RingsDB.

If you’re interested in getting into the Lord of the Rings Living Card Game, you can check out the deals at OzGameShop, including discounted expansions. The Core Set is all that you need to build decks and get yourself underway. At OzGameShop, delivery is free for orders over $50, and purchases via this link support the House of Nerdery.